Posted on April 5, 2011 by francesbarrie 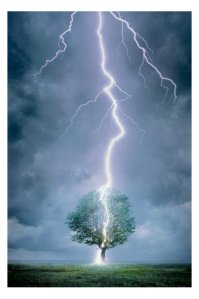 When I was growing up, my mother was ridiculously afraid of lightning . Whenever a storm threatened our family my mom would unplug all the appliances, make us put on our sneakers and wear rubber bands around our wrists and sit in the middle of the room until it passed.  We were not allowed to take showers or, God forbid, talk on the phone because everyone knew that Mrs. so-and-so was electrocuted right there in her kitchen one day while she talked to her daughter on the telephone and Mr. so-and-so was killed while lathering up in the privacy of his own bathroom.

Whether these horrible occurances actually happened didn’t matter– we never investigated further, taking my mother’s word for it.  Unlike the kids today who question the validity of everything we say to them, we tended to take our parents’ word as gospel. Just like my lovely friend Clare who still believes that lightning can come up through the toilet because her father said so. Actually, that may be true.

So now as a mom, I have spent the last 17 years following in my mother’s footsteps and passing on my phobia’s about lightning to my kids.  Around my house, when it thunders and lightnings, everyone knows to look for me as I might be crouched under a table, or running to my basement. My kids have seen me get out of bed in the middle of the night when the lightning flickered like a strobe light around the house and sit for hours in the middle of the upstairs hallway –the only place without windows. They’ve seen me have panic attacks and stay sweating in my car with the windows rolled up tight, refusing to go across the parking lot into the store until the storm had passed. They’d witnessed my utter breakdown when I was stuck with them in a metal canoe, in the dead center of a lake when a storm rolled in faster than I could paddle to the opposite shore–my own personal idea of hell.

But yesterday, when it thundered outside my kitchen window and the dog slunk upstairs with her tail between her legs to shiver under my bed, my oldest son looked at me in mocking expectation.

“Are you freaking out?” he asked

“Really?” he said with a disbelieving cocked eye-brow.

“Lightning doesn’t scare me anymore,” I said. “Neither do bees, or the dark, or anything much. Having cancer took care of that.”

“That’s cool,” he said, and went back to his texting.

Sometimes we don’t realize that things have changed within ourselves until we say them out loud. I hadn’t even realized that my fears had subsided until I voiced it.  Being told you have cancer, then being told it’s aggressive, then getting through surgeries and chemo–Well, hell, if I can do that, what exactly can lightning or a bee sting or the dark do to me?

It was well known to anyone that knows me that I was afraid of lightning, but my other fear lingered quietly in my mind–my fear of death.  That isn’t one, most people talk about. My fear of death and dying always stayed low, crouched behind my couch, waiting to jump out and say ‘boo’. And although that fear still lingers in some aspect, it seems to have shifted a bit since my diagnosis.  It seems now, that more than I fear death as it exists, I fear ‘not living’.

My fear these days is that I will not squeeze as much life out of each day as is possible. Living without purpose and gusto doesn’t make much sense to me anymore.  Lightning will strike, bees will sting, the dark exists,death will happen, there is not a lot I can do about those things. But life on the other hand–there is an awful lot I can do about that.

Cancer survivor,mom,triathlete,writer,jewelry maker, baker. Staying happy and healthy,living life and enjoying it one moment at a time.
View all posts by francesbarrie →
This entry was posted in Uncategorized. Bookmark the permalink.